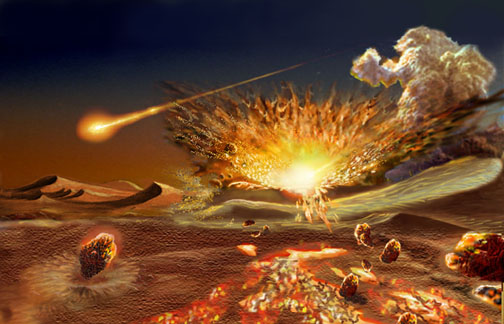 Don Dixon’s painting for Jeff Wynn’s National Geographic article (Nov 1998). This is a representation of what the initial impact of a ~3,500 ton,  10-meter/35 foot-diameter iron-nickel bolide might have looked like.  It would have been a beautiful scene to actually witness, but you would not have survived the rain of molten glass that spread out over a kilometer from the impact site. 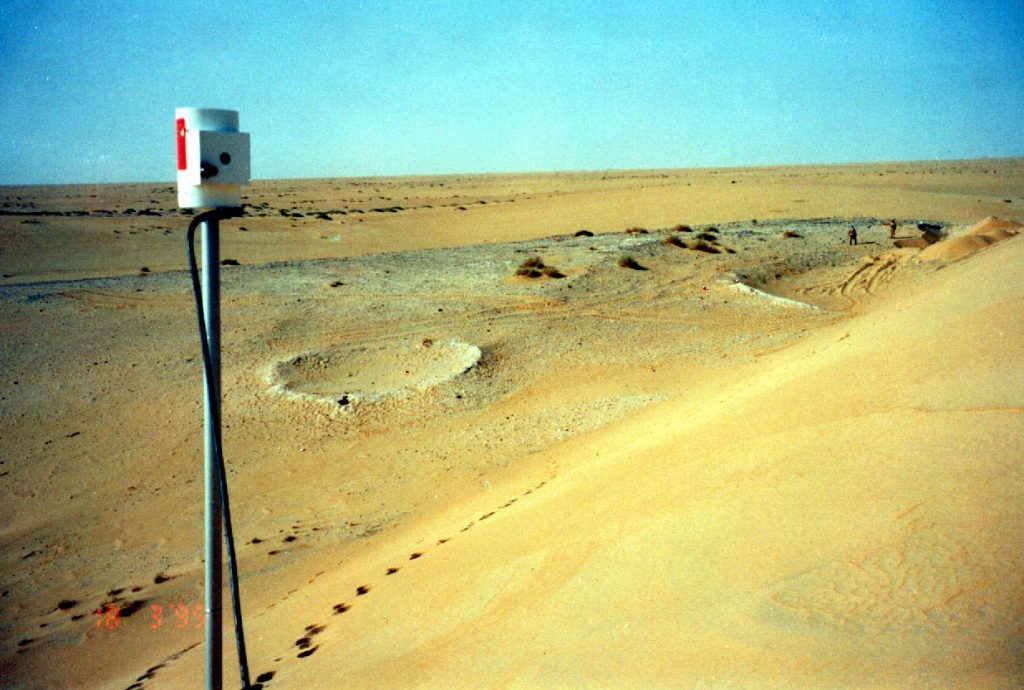 A proton-precession magnetometer sensor (left foreground) ,  the “Wynn” crater  (center left; name chosen by Shoemaker), and the “Philby-A” crater  (upper right). The Seif dune  (right foreground) is moving left/southwest at a rate of about a meter per year. As of 2006 these craters were both re-buried – probably for centuries. 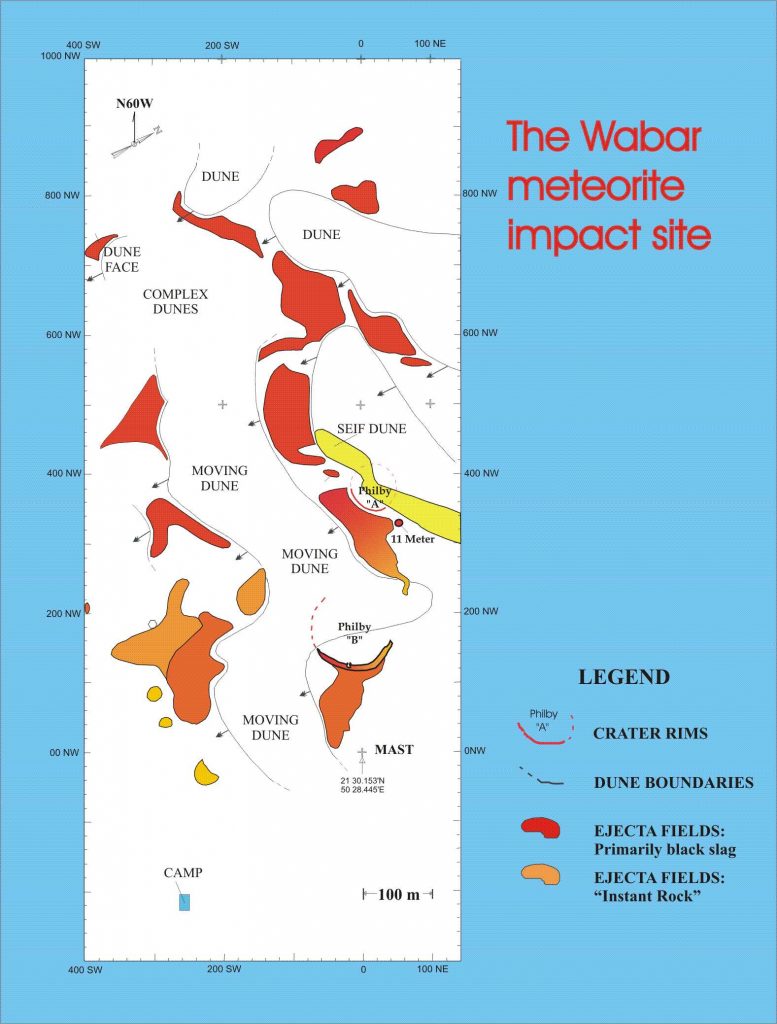 Geologic map of the Wabar Asteroid Impact site (Wynn and Shoemaker, 1996, 1998). Arrows show sand movement under the diurnal wind regime. The Wabar bolide arrived from the direction of Riyadh,   N60W of the impact site.  This map required a week for us to assemble. Note the down-range (S60E) asymmetry of the ejecta. The circular craters and preponderance of geologic, geophysical, and chemical evidence show the incoming bolide arrived at an angle greater than 22 degrees but less than 45 degrees, in the direction S60E (it passed over Riyadh, heading southeast). 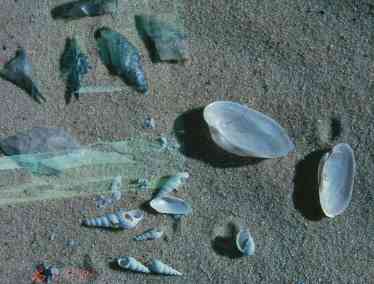 Fresh-water mollusk shells and ancient arrowheads found on the margins of a 10,000-year-old dry lake in the southern Empty Quarter.

Calibrated thermometer, at the standard 4 feet off the ground and under shade, showing 55 C/131 F temperature from Expedition #3.  The same thermometer went off-scale (to at least 61C/142 F)  during  my magnetometer profile on Expedition #1. 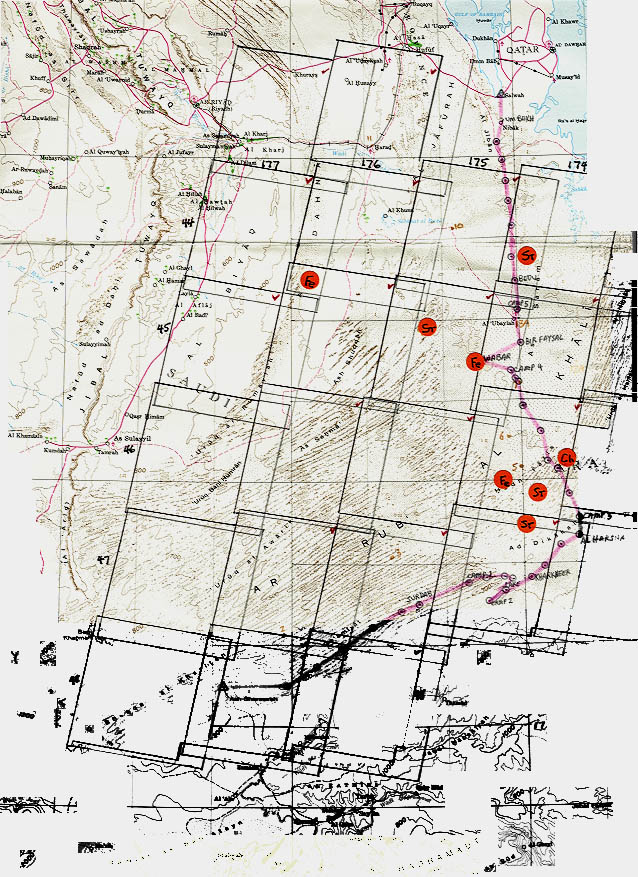 Gene Shoemaker, diagramming the locations of the Philby-A (64 meters), Wynn (11 meters) , and Philby-B (160 meters) craters, during a news conference in Riyadh after returning from Expedition #3.

Attempts to reach the  crater “rind” by driving steel poles into the sand (it was unsuccessful). Rim of the Philby-B crater, Expedition #3. 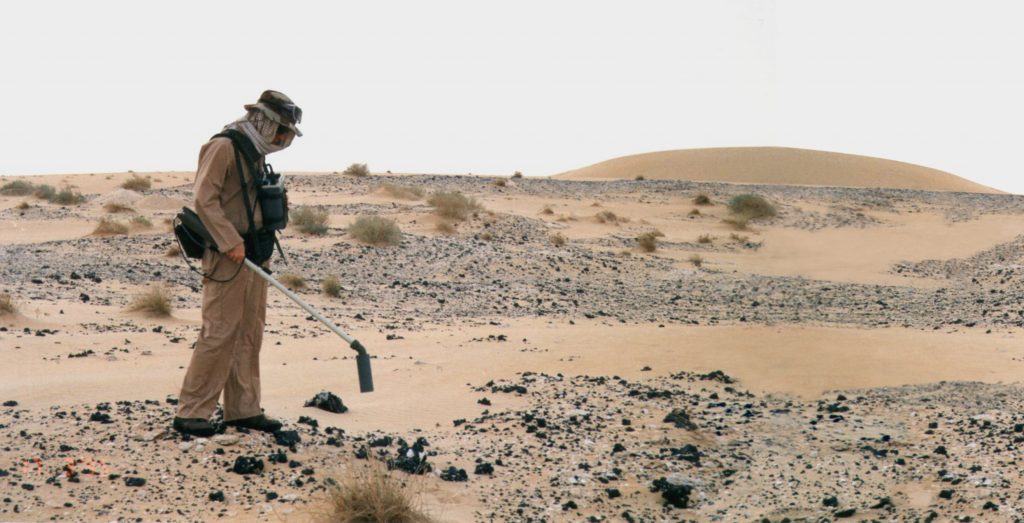 Jeff Wynn operating a cesium-vapor magnetometer at the ejecta field of Philby B crater, Wabar Impact site, Empty Quarter. This  located a few oxidized “elephant-ear texture” iron fragments (below) from the original bolide for chemical analysis. They are identical to iron fragments found 25 km NNW at a site called “Umm al-Hadida.” This, along with historical records of a fireball passing over Riyadh in 1863 in the direction of Wabar, allowed us to certify the bolide’s north-to-south incoming path.

A very rare, unoxidized iron-nickel meteorite fragment (lower left), and so-called “elephant-ear texture” oxidized iron fragments (top center and lower right). Note the intimate contact with Impactite (“Instarock”) on the lower right sample. When this happens, the shock-created sandstone was heated so fiercely that bubbles of gas dissolved in the original quartz and feldspar sand exolved under temperatures believed to exceed 10,000 C.

Examples of  white “Instarock”. Initially mistaken for bedrock excavated by the impact explosion, these are instead crudely-laminar sandstone fragments created and fused by the impact shock-wave  passing through the local sand.  Field notebook for scale. 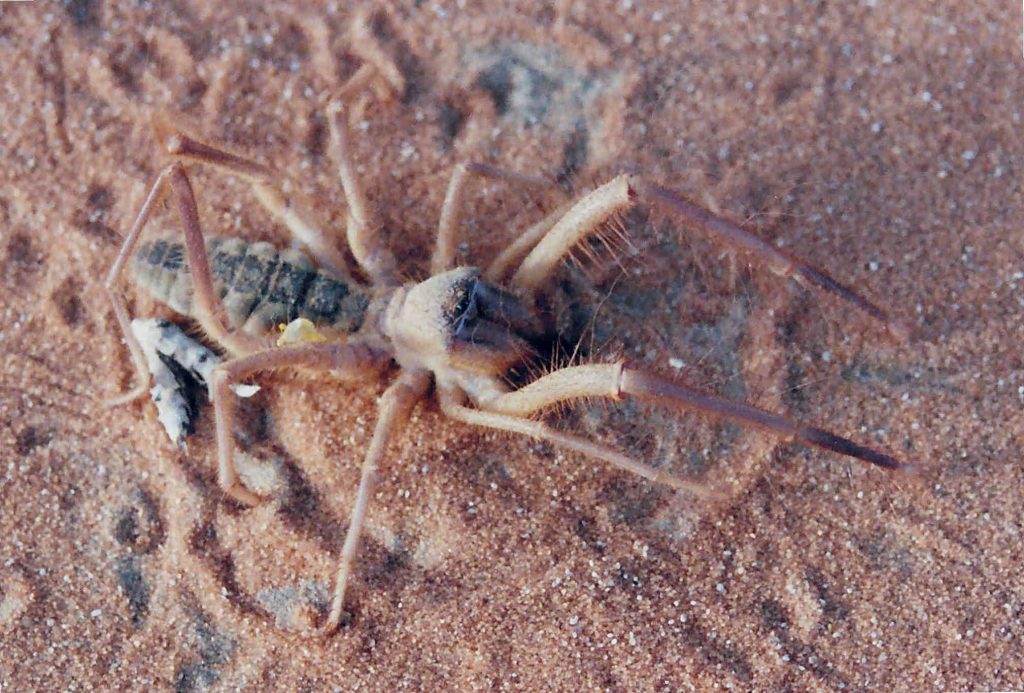 A Shabat or “Camel Spider” – actually a Solifugid (note the  ten instead of eight legs), approximately 15 cm/6 inches across. These creatures have four opposing black fangs, and can travel across sand faster than a man can run. In one case, a somewhat smaller one ran up my leg – under my jeans. I stopped and crushed at at my thigh before it could bite me. Anecdotal evidence suggests that these things hunt and eat scorpions.